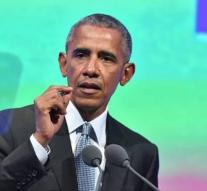 washington - US ex-President Barack Obama thinks his successor Donald Trump 'denies the future' by withdrawing from the Paris treaty. He says that in a statement that was spread on Thursday at Trump's speech. The government of Obama committed itself to the treaty in 2015.

'I think America has to be at the head of the troop. But even without the leadership of the US, even if this government accompanies a handful of countries that deny the future, I am convinced that our states, cities and businesses will stand up and even do more to protect future generations from one planet we have. ''