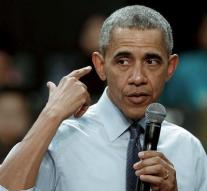 - US President Barack Obama on Thursday promised a thorough investigation into the circumstances surrounding the shooting in California. Thus came Wednesday Fourteen people were killed and seventeen were injured.

According to Obama, it is still not clear why the two suspects committed the massacre.,null, It may be that this had to do with terror. It is also possible that it had to do with work, '' the president said after a meeting with his national security advisers.