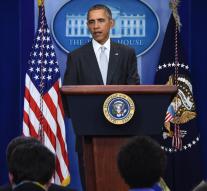 - US President Barack Obama has condemned the attacks in Paris Friday. He called it a " disgraceful attempt to terrorize people." Obama said the United States to monitor the situation closely and France where it can will help. "France is our oldest ally. The French and American people have always stood shoulder to shoulder," Obama said. They stressed that the US also now stand behind France "in the fight against terrorism and extremism."

Obama has not spoken with French President Francois Hollande. " I have not called him yet. I estimate that he is now too busy for that. In the coming days I will certainly have contact with him. "

The American Secretary of State, John Kerry, keeps an eye on developments in Paris, announced his ministry. The US Embassy in Paris is still looking out whether Americans are involved. Kerry is itself in the Austrian capital Vienna for consultations on the war in Syria.