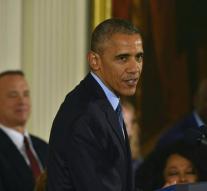 - Sunday Barack Obama will not attend the burial of the urn with the ashes of Fidel Castro. This was announced by the White House on Monday. Vice President Joe Biden also will not go to the ceremony in Santiago de Cuba, in the southeast of the country.

Relations between the arch-enemies USA and Cuba have improved under Obama properly. The US president paid a historic visit to Cuba in March and spoke with ruler Raul Castro. His older brother Fidel, he met not. The revolutionary leader died Friday at the age of 90.