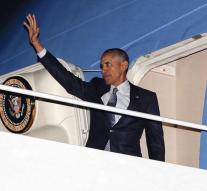 athens - US President Barack Obama begins Tuesday on his last trip to Europe as head of state. Under extremely tight security with the help of 5,000 police officers will visit Obama Tuesday in Athens his Greek counterpart Prokopis Pavlopoulos and then Prime Minister Alexis Tsipras.

The main topics are the migration from the Middle East, the Greek debt crisis and the possible role of NATO partner Greece in the turbulent region. It is believed that Obama on his trip receives many questions about the course his country strikes among his controversial populist successor Donald Trump.

Wednesday, Obama holds a speech in Athens and then fly to Berlin. After his farewell visit to the Federal Republic he goes to Peru Friday for a summit of the 21-member APEC, a collection of countries in America, Asia and Oceania all located on the Pacific Ocean.