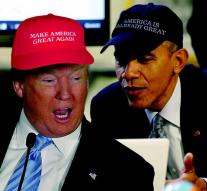 - US President Barack Obama has lashed out hard after the nuclear summit in Washington to the Republican presidential candidate Donald Trump. Obama responded to comments from Donald Trump that countries like South Korea and Japan to ensure that they possess nuclear weapons to neutralize the threat North Korea.

Democrat Obama: 'What do these statements tell us is that the person who does not know much about foreign policy on the Korean peninsula or the world in general. '