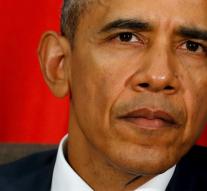 - US President Barack Obama will hold a summit in September next year about refugees. The US ambassador to the UN on Monday (local time) announced in New York.

The subject of the calls are mainly the problems of displaced persons from Syria, but also on asylum seekers is presented from other countries. Who gets an invitation to the summit, is not yet known. Beforehand however the US ask for more money from friendly countries to address refugee problems.