Home / World / Obama jokes about Trump during a visit to Amsterdam 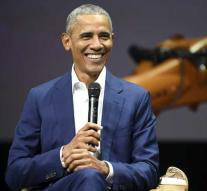 amsterdam - Barack Obama was in Amsterdam on Friday to talk about leadership, not about Donald Trump or current political issues. Yet the former American president could not resist to refer to his successor in the White House in a devious way.

According to Obama, a good leader must tell a good story, that explains to people what direction they should go. 'Facts do not affect people that much, especially not at this time,' the ex-president joked, after which the audience burst into laughter.

Obama also told how during his reign he succeeded in dropping suitable people at important posts around him. Subsequently he underlined his role in the realization of the Paris climate agreement in 2015. And the strong job growth in the United States, which Trump is so proud of: was not that actually started when his predecessor was at the helm?

It was not for everyone to see Obama. He acted as the crowd puller at a major event in AFAS Live, formerly the Heineken Music Hall. The cheapest tickets cost almost 1000 euros.

Incidentally, not everyone was happy with the high visit in the Dutch capital. A duo member of the Amsterdam group from DENK called via Twitter to drag Obama to the International Criminal Court in The Hague. 'Ill. Then you kill thousands of innocent Pakistanis with your drone program and you can cash in to talk about your crimes ', said in the tweet from DENK politician Sheher Khan.

How much Obama is left with the action is not clear. American presidents are known to ask for high sums of money for this type of schnabbles after their presidency. Bill Clinton, for example, is also a very popular speaker and he earns millions of dollars every year. Obama would have already raised some $ 400,000 for some speeches.