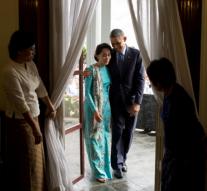 - US President Barack Obama plans to further ease sanctions against Myanmar. Which sources left out by the US government to Reuters. Mid-September brings the foreign minister of the Southeast Asian country, Aung San Suu Kyi to visit Washington.

It is expected that Obama at Suu Kyi will assess to what extent it wants Washington thumbscrews running looser with the still-powerful army of Myanmar. The Nobel laureate was in her time as opposition leader under house arrest a strong supporter of Western sanctions against the military dictatorship in her country.

Now the role of the military has become smaller with Suu Kyi as Minister for Foreign Affairs and Advisor of State power in the hands. With her influence she tries to let the people benefit from economic growth as they will keep up the pressure on the generals, to create more democratic reforms.


Obama is also prudent to completely lift the sanctions against the Southeast Asian country, thereby losing an important means of exerting pressure. He wants to improve relations with Myanmar in order to counter the increasingly important role of China in Asia. Washington also wants US companies can benefit from access to the under-developed but rapidly growing economy of Myanmar.

Suu Kyi will on 14 and 15 September a visit to Washington for meetings with Obama, Vice President Joe Biden, members of Congress and business leaders. It is the first visit by Suu Kyi to the US since its election victory in November 2015.