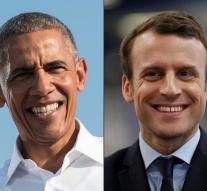 paris - Barack Obama hopes that Emmanuel Macron will be elected to the new president of France on Sunday. That said the former United States president on Thursday in a video message made public by the Macron campaign team.

Obama said in the video that 'Macron appeals to the feeling of hope in the French and does not respond to anxiety. The French elections are important for the future of the country and the values ​​we all care about, 'Obama said.

According to polls, Macron wins the elections. The polls have shown a broad lead for the social-liberal candidate for weeks. He could count on about 60 percent of the votes, against 40 for his opponent Marine Le Pen.