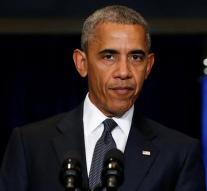 warsaw - President Obama has condemned the attack on police officers in Dallas sharply from Warsaw. He called the gunmen 'cruel, calculating and contemptible.'

'I speak for all Americans when I say that we are shocked by the events,' he said at a press conference in Poland where he is attending a NATO summit. He said that he has conveyed his condolences to the mayor of Dallas.

'There is no justification for violence against the police,' said Obama, who again turned his sights on the gun laws in his country. 'We know that walking around as people with heavier weapons, these kinds of shootings deadly and tragic. '


The president said the authorities in the Texan city of its full support in resolving the drama. He is constantly kept informed of developments in the shooting.

At the shooting in Dallas were five agents when they were targeted by snipers.