Home / World / Obama: give one all year 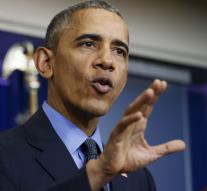 - Barack Obama is in his last year as president of the United States do not intend to sit still. That said a year from outgoing president Friday in his last speech of the year. 'I'm going to give everything next year. When an opportunity arises, I'll take it.'

One of the goals of Obama to close the controversial Guantanamo Bay prison next year. That seems by recalcitrant Republicans to fail in Congress. However, he has set a target to reduce the number of prisoners to get the hundred.

Obama called on the American people to alert To stay in the fight against terrorism. By saying something when we see something suspicious, by refusing to be terrorized and by remaining united as one big family.