Home / World / Obama: figure out how to stop shootings 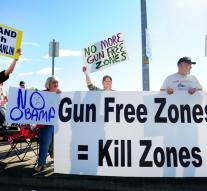 roseburg - The United States must find a way to mass shootings like that stop on campuses. The US President Barack Obama said Friday during a visit to the place Roseburg in Oregon . There he met survivors of the shooting at a school in that place, where earlier this month were nine deaths. The gunman himself committed suicide.

On the day of Obama's visit to Roseburg America was shaken by two new shootings on campuses. When a student at the University of Northern Arizona in Flagstaff came one person was killed and three were wounded. On the campus of the University of Houston, Texas, two people were shot. One person was slain, another was injured. In both cases, suspects held. The visit Obama in Oregon is controversial.

The US president serves as advocate of stricter legislation against firearms. But many citizens find in Oregon and in other parts of the United States despite the massacre in Roseburg that more security can only be guaranteed by more firearms.Back then Obama rode in convoy to the town , some 250 demonstrators were waiting for him with placards on . On it were slogans like ' We give our rights are not and Leave us alone '.