Home / World / Obama: do not judge too quickly Trump 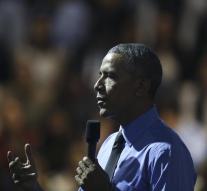 - On his last major foreign trip as president of the United States Barack Obama called not too quick to judge his successor Donald Trump. 'Do not expect the worst, hope that the government does its work and commitment, then you can make a judgment,' Obama held Saturday an audience of about a thousand students and young executives to Lima.

Obama attends a summit of the Asia-Pacific Economic Community in the Peruvian capital (APEC) at. As after every election there is now a period of uncertainty.

'It will not be the same as he reigns and the way he has conducted election campaign,' Obama said Trump. Major changes in policy towards Latin America, he did not expect. US interests are best served by good relations with its neighbors, he said.