Home / World / Obama: Democracy is the best form of government 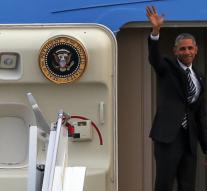 athens - The 'birthplace' of democracy, Greece, leaving President Barack Obama Wednesday made the case for strengthening it. It's not a perfect system, Obama said during his farewell visit to Athens, but it is still 'the best form we know.'

Obama acknowledged the same time that 'world people are tempted by cynicism' because they believe that politicians and governments do not care about them. He says it's often a matter of political will to do something about it. So need more people can benefit from the advantages of globalization. 'If people feel they are losing control of their future, they will counteract. '

'We can not look back to find answers, we need to look ahead,' said the man who will soon leave the White House. Obama's next destination is Berlin. There he is in talks with European leaders. It will include more about the relations between Europe, the US and Russia, especially if Donald Trump will soon be president.