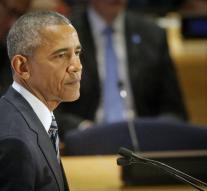 - In the final speech of US President Obama for the United Nations General Assembly in New York, he has spoken out against the isolation of countries by building walls. ' A country surrounded by walls, put only themselves trapped, \'\' believes the world leader.

Obama went inter alia to the situation in Syria. The US president calls for a diplomatic solution to the conflict. Without naming President Putin by name, criticized Obama called the attitude of the Russians. He talked about muscle men who wanted to recover their power through political repression. German Chancellor Angela Merkel and Canadian Prime Minister Justin Trudeau received kudos for their efforts during the refugee crisis.

In total there were 34 speakers at the General Assembly. The Secretary-General of the United Nations, Ban Ki-Moon stressed in his speech that it is important that the 193 Member States to ratify the climate agreement in Paris.