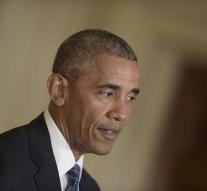 - US President Barack Obama takes the Republican presidential candidate Donald Trump unfit to serve as president. He said Tuesday at a news conference at the White House. He made his comments on Trump's criticism of the family of an Iraqi killed Muslim American soldier and Trump's lack of understanding of important issues.

,, There must come a point where you say, someone who makes such statements do not have the judgment and character to exert the most powerful position in the world. There comes a point where you say 'enough', '' Obama said. He relied in the Republican leaders who argued repeatedly Trump's statements to the jaw, but who continue to support him nonetheless in the race for the presidency.,, Why do you support him? 'Obama asked.