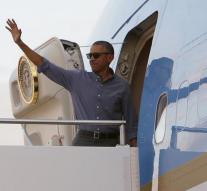 london - Barack Obama goes to London next month to persuade the British to remain in the European Union. It reports the newspaper The Independent on authoritative sources in Downing Street.

The US president will open next month a major technology fair in Germany. His visit to Britain is an extension of that visit.

Proponents of the so-called Brexit, the departure of the British from the EU, are furious over the prospect that Obama is going to interfere in the campaign.,, If an American president to interfere with our constitutional future, I always reread the American Declaration of Independence, '' said Steve Baker, Lagerhuislid for the Conservatives. His colleague Peter Bone said:,, Why would President Obama Britain tell whether we were a part of a European superstate or to be an independent nation. He should keep his comments to himself and his ideas. ''