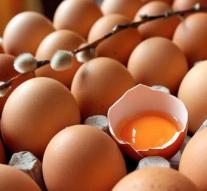 the hague - The Dutch Food and Welfare Authority (NVWA) investigates the use of the prohibited drug fipronil in the poultry sector. That made the authority known on Saturday.

The NVWA has now found this drug in four poultry companies. These companies must recall their delivered eggs. It is not yet clear where the contaminated eggs have come to an end. 'It has to be shown', according to a spokesman.

Exposure of eggs has been blocked by another three poultry companies. The companies are spread over land and are not concentrated in one area, according to a spokesman.

According to the saying, there is no 'direct danger' for public health.

Fipronil is used inter alia as a pesticide. It is also on flea bands of cats and dogs.