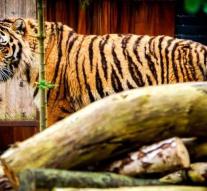 kathmandu - Nepal appears to be the first country to achieve the so-called TX2 target: a doubling of the wild tiger population in 2022. Since 2009, the number of tigers in the Himalayan state has increased from 121 to about 235. The World Wildlife Fund (WWF) has announced this on Sunday..

The TX2 objective is an agreement between the 13 countries where tigers occur in the wild in 2010. According to the Chinese calendar, 2022 is the year of the tiger.

The success of Nepal has to do with the great political will in the country to protect the tiger. 'Protecting tigers is a high priority for the government,' says Bishwa Nath Oli from the Ministry of Forests and the Environment. 'Our commitment to the global tiger program will only grow as the populations in Nepal grow and our measures work out well. '