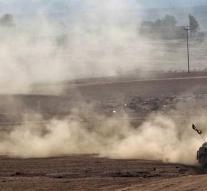 - The number of families fled the Iraqi city of Mosul, is increasing rapidly. Two weeks ago left there 875 families. That number last week risen to nearly 7,000 families. In total, nearly 42,000 people left the city.

Mosul since October 17 the target of an offensive of mainly Iraqi and Kurdish troops. The city is still in the hands of Islamic State, but approaching the Iraqi forces.

Convoys of buses and trucks leaving Mosul and daily report to a camp at Hassansham being run by the United Nations, said the aid agency Oxfam, which is partly based on figures from the International Organization for Migration.

In Hassansham are tents for only 1950 families available. The camp is almost full. Another refugee camp, at Qayarrah, is already full. Aid agencies do everything possible to get the spot include water, blankets and medical assistance. Winter is approaching and the nights are cold in the area.