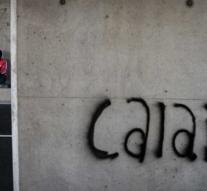 arras - The number of refugees staying in a refugee camp near the French port of Calais , doubled to 6000. That's the prefect of the region said Friday.

Fabienne Buccio of the department of Pas-de-Calais said the number of people in the camp for the summer was still 3000 and then stabilized, but in the last three weeks, the number of refugees suddenly doubled. " I do not know what happens hereafter , but 6000 is a maximum ", she said.

According to the prefect, the authorities are struggling to find the balance between assistance to the migrants and the application of French law.