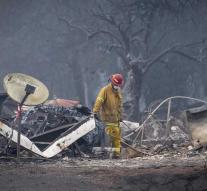 paradise - The number of missing people after the deadliest and most devastating forest fires in California's history has risen to 630. At least 63 people were killed by the fires that broke out a week ago north of San Francisco.

The authorities attributed the high death toll to, among other things, the enormous speed with which the flames, fueled by the wind, raged through the parched bushes and trees.

Especially Paradise, a town with 27,000 inhabitants, was hit hard. Almost 12. 000 houses and buildings were laid in the ashes.