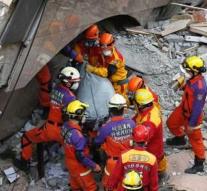 taipei - After the devastating earthquake in the Taiwan city of Hualien, the death toll has risen to seventeen. According to Chinese state television, the bodies of a missing family of five members from China were found on Friday.

Rescue teams reported earlier that they also removed the bodies of a Canadian couple from the rubble of the Yunmen Cuiti building. The Canadians and the family from China were in a hotel that was housed in the heavily damaged complex. The skyscraper had fallen dangerously skewed after the earthquake on Wednesday night because the lowest floors had collapsed.

The quake with a strength of 6. 0 caused great damage to the east coast. More than 270 people were injured. More than two hundred aftershocks made the rescue work more difficult in the past few days.