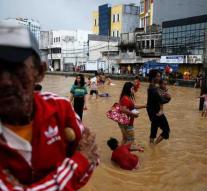 jakarta - The authorities in the Indonesian capital Jakarta have evacuated thousands of people because of flooding. Heavy rainfall also caused landslides in neighboring cities. As a result, according to the police, eight people are missing around the city of Bogor.

Governor Anies Baswedan of Jakarta said that about 6500 people had to leave their homes because of the flood. ' We ensure that the evacuees get help '', he promised in a statement on Tuesday.

On television footage, a day earlier was shown how the water flows through the streets. The Jakarta Globe newspaper reports that a railway bridge at Soekarno-Hatta International Airport collapsed on Monday afternoon as a result of the severe weather.