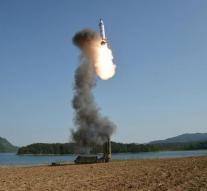 washington - North Korea is unambiguously on its way to develop a ballistic rocket that can be equipped with a core head which can reach the United States. That said General Vincent Stewart, Director of the Military Intelligence Service, said Tuesday in the US Senate.

'If the regime goes on, it eventually succeeds in launching a nuclear projectile that is a threat to the mainland of the US,' said Stewart. 'It's almost impossible to predict when it's so far, but the North Korean government is determined to develop this force and follows a path that inevitably leads to it.'