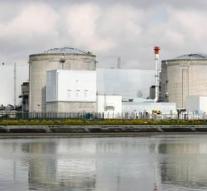 brussels - The water basins in which radioactive fuel rods are refrigerated at nuclear power stations in France in Belgium are 'particularly vulnerable' in an attack or aircraft crash. That puts seven experts in a report of Greenpeace France.

The refrigeration bases for temporary storage of fuel are located outside the reactor bunkers and, according to the environmental organization, are 'very poorly protected. 'Following the attacks of September 11, 2011 and the recent attacks in France and Belgium, a voluntary attack can no longer be ruled out,' said Greenpeace.

A pelvis contains several hundred tons of nuclear fuel, two to three times more than one reactor. When the cooling water goes out, the fuel rods will be exposed and the temperature and radiation will rise. This can lead to a nuclear disaster that releases much radioactivity and millions of people are affected.

The organization calls on the authorities in both countries and the deputies to 'cease to endanger the citizen. 'Greenpeace does not report the' sensitive details 'report publicly.