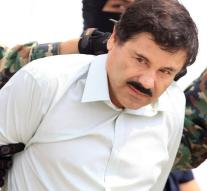 - In the cell of the Mexican drug lord Joaquín " El Chapo " Guzmán were heard for his escape construction noise. The guards did not see a reason to intervene , according to images broadcast Wednesday by television network Televisa.

Camera images from the cell Guzmán shows how the top criminal the volume of his television turns up , presumably to mask the noise. The drug lord escaped shortly afterwards via a tunnel that had been dug by accomplices to his cell. The government had the pictures of the build-up to the escape released earlier, but they were not accompanied by sound.

A spokesman for federal prosecutors could not immediately confirm whether the transmitted sound recordings are genuine. Mexico's Interior Ministry acknowledged earlier that the drug lord had been unable to flee without help from prison staff.