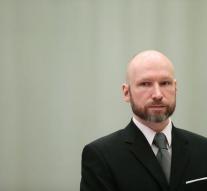 oslo - The Supreme Court of Norway does not appeal to Anders Breivik's appeal. The massacre wanted to appeal against a March decision by a court that ruled that his human rights in prison were not violated.

Breivik's lawyer announced today that he will go to the European Court of Human Rights in Strasbourg.

The 38-year-old prisoner committed two attacks in Oslo in 2011, bringing a total of 77 people alive. He was sentenced a year later for multiple murder and terrorism. He was sentenced to 21 years of imprisonment with the possibility of extension. After 21 years, he is seen if he is still a danger to society. If so, then the sentence can be extended with each period of five years.

Anders Breivik had protested against the circumstances under which he should be punished. He stays in almost complete isolation in a cell that counts three spaces. He has no intercourse with fellow prisoners and is in a special place for him alone.