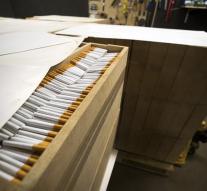 oslo - Cigarettes may only be sold in Norway in neutral packaging without a brand name. This weekend has become a law that determines that. Norway is the fourth country that imports this.

Australia started in 2012 with blank packs. Since then, the percentage of smokers among the Australians would have fallen by just over half a percent. Meanwhile, Britain and France have also introduced the rule.

The tobacco industry has one year in Norway to introduce a neutral, green-brown cigarette and snuff packaging tobacco.