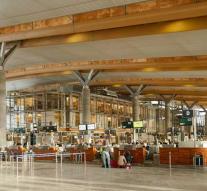 oslo - Norway has arrested a Russian on suspicion of espionage, reported the Norwegian press agency NTB on the basis of the security service PST.

The man was arrested Friday at Oslo airport and was detained for two weeks after he was brought to court in Oslo. He is suspected of illegal intelligence work after attending a seminar on digitization in the Norwegian parliament. The police are investigating an incident in parliament in connection with the seminar, according to the news agency.

The parliament organized a seminar on Thursday and Friday for administrative staff from parliaments from 34 countries.