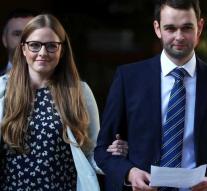 london - The Northern Irish bakery couple who refused to bake a cake with the message 'support gay marriage' has not been guilty of discrimination. That is how the British Supreme Court ruled after years of legal battle. Lower judges thought that the bakers were discriminating, but the highest court of appeal spoke to them freely.

Daniel and Amy McArthur from Belfast did not see it in 2014 to bake a cake with the image of Bert and Ernie, the slogan and the logo of QueerSpace, a lobby group for gay rights. 'It is contrary to what the Bible proclaims,' ​​Daniel McArthur said at the time.

According to the Supreme Court it is clear that the objections of the Christian bakers were not directed against the person of Gareth Lee, the man who wanted to order the cake, but against the message. If they had refused him as a customer because he is homosexual or supports gay marriage, they would have been in violation. 'But that is not the same as forcing them to deliver a cake with a message that they wholeheartedly disagreed with', the chairman of the court motivated the verdict.