Home / World / North US braces itself for snowstorm 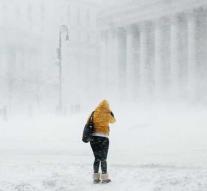 milwaukee - Residents of a number of states in the north of the United States are preparing for a possible disruptive winter storm that is expected in the next 24 hours.

In the states of Montana, North and South Dakota, Minnesota, Wisconsin, Illinois and Michigan a load of snow up to half a meter is expected. Due to the strong wind and temperatures well below zero, the Friday feeling temperature is close to 20 degrees below zero, predicts the American National Weather Service.

Motorists are warned not to go on the road, due to almost no visibility during the snowfall. The two major airports in Chicago have already removed 170 flights. The two scheduled flights from Schiphol to Chicago are still on schedule. Many regional airports in the area have also canceled flights.

Because of the weather, many schools in the Chicago and Detroit regions have decided to stay closed on Friday. Due to the winter weather in the area, at least eight people have been killed in several accidents in recent days.