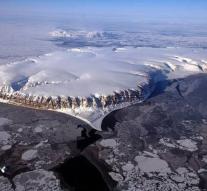 - The northern polar region warms up much faster than the rest. This year reported Tuesday a report by the US National Policy Organization for Ocean and Atmosphere (NOAA). The warming in the Arctic is twice as fast as elsewhere and has far-reaching consequences.

NOAA compares the temperatures measured over October 2015 to September 2016 with the average from the years 1981-2010. The polar researcher at NOAA, Jeremy Mathis, says now that the figures clearly show that the Arctic is indeed the hardest hit by climate changes caused by human activity. He called 2016 the toughest year for the North Pole that he had ever experienced.

For the coast of Greenland, the temperature of the ocean such as 9 degrees higher than the average for the years 1981-2010. It is also becoming warmer, which prevents recovering ice in the fall and winter.

The assertion that man has a hand in global warming, mainly by greenhouse gas emissions, is rejected by many who form the new government in Washington in January, including President Donald Trump.