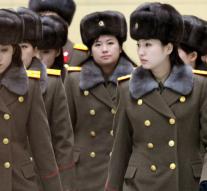 - The first international appearance of the North Korean girl- pop group the Moranbong Band, is shortly before the start of the action in Beijing deleted. The group would give three concerts starting Saturday in Beijing, but for unknown reasons that do not go suddenly. Rock band has left Beijing and would have gone back to North Korea.

The Moranbong Band was founded by the dictator of North Korea, Kim Jong-un. The young band members to travel in military uniform, but dress up for the concert. Their repertoire includes songs from propaganda.

According to observers, would be their first performance in China, because Kim would thus reduce tensions between Pyongyang and Beijing.