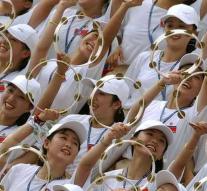 seoul - North Korea is prepared to send a 230-strong cheerleaders team to the Olympic Games. A delegation from the dictatorial government made that proposal during talks with the South Koreans, reports the South Korean state press agency Yonhap.

The neighboring countries talk about Pyongyang's involvement in the Winter Games in South Korea. Discussions focus on practical points, such as the size of the Northern delegation, a possible joint appearance during the opening ceremony and the possibility to create a united Korean women's ice hockey team.

The relationship between the countries came under further pressure last year due to North Korean nuclear and missile tests. The North Korean leader Kim Jong-un was looking for a rapprochement early this year by suggesting that his country could send a delegation to the Games.