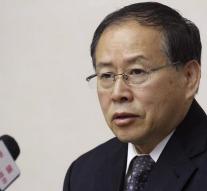 pyongyang - North Korea is demanding extradition demands of 'terrorist suspects' who would be involved in a plan to kill leader Kim Jong-un. Deputy Minister Han Song Ryol (Foreign Affairs) said in Pyongyang that his government 'wants to find all terrorist maniacs and ruthlessly wipe out', Chinese and North Korean state media reported.

The North Korean state press office KCNA reported last week about the alleged plot, where US and South Korean intelligence services were supposed to be behind. They would have been killing Kim with a biochemical weapon. North Korea has sworn to chase the suspects all over the world.

The CIA and the White House refused to respond earlier to the allegations. The South Korean intelligence service said the story was taken out of the air. Nevertheless, Minister of Foreign Affairs Han called on foreign diplomats and reporters Thursday to announce a request for extradition.