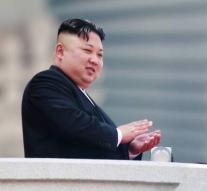 seoul - North Korea demanded extradition from the head of the South Korean intelligence service on Friday. According to prosecutors, Lee Byung-ho is one of the driving forces behind a murder plot against leader Kim Jong-un, reported KCNA State Press Office.

Pyongyang accused the US intelligence service CIA and the South Korean intelligence service last week of a plot to kill Kim with a biochemical weapon. The regime announced Thursday's request for extradition, but it was still unclear what suspicions the country was facing.

The North Korean authorities called on Friday for detention and extradition of NIS boss Lee, two other South Korean officials and a Chinese man. The NIS previously suggested that accusations were taken out of the air. The service reported Friday that Lee did not want to respond to the request for his extradition.