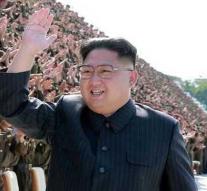 seoul - In a rare statement, North Korea has called all Koreans to force a breakthrough to unite the two Koreas without the help of other countries. In the statement Pyongyang says that all Koreans should promote 'contacts, travel and cooperation between North and South Korea'.

At the same time North Korea warns that it will 'destroy' all threats of that unification. The relations between the two Koreas have come to some rest in recent weeks after months of rising tensions, mainly due to missile testing in the north.