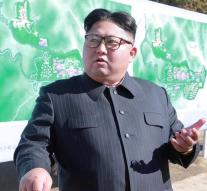 seoul - North Korea is about to release an American who was arrested last month. That was reported by American and South Korean media on Saturday.

It is Bruce Byron Lowrance, who was arrested on 16 October when he illegally crossed the border with North Korea from China. According to North Korean state media, the American has stated that he worked for the American intelligence service CIA.

The release would be a sign of rapprochement as the talks between the US and Pyongyang about the country's nuclear weapons program have stalled.