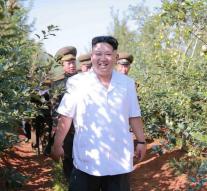 seoul - North Korea on Wednesday morning fired a ballistic missile from a submarine in the Sea of ​​Japan. Reported that the South Korean news agency Yonhap.

According to the military leadership of South Korea's rocket was fired around 05. 30 pm local time for the port of Sinpo. It is not the first time the communist country test missile from a submarine. In April and July this year were fired missiles off the east coast.