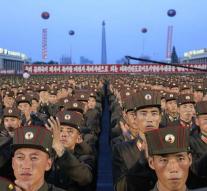 The North Koreans claimed to have launched a so-called ICBM earlier this month. The Hwasong-14 projection reportedly reached an altitude of over 2800 kilometers and reached 933 kilometers from the launch site at sea. The rocket flew as far as an ICBM, the NIS would have reported to parliament.

Yet, Pyongyang's service still suspects the technology to successfully return a projectile to Earth. A return trip through the atmosphere is accompanied by high temperatures, which can cause objects to burn. 'It seems that they have not gained that technology yet,' said the intelligence service, according to the South Korean press office Yonhap.

According to the South Koreans, Pyongyang is not ruled out with another problem. The regime also lacks the technical knowledge to lead a long-distance projection to the right target.