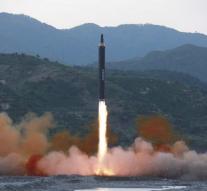 It is not clear what type of rocket it was, but it could have been a ballistic missile, according to South Korean media. UN resolutions prohibit the country from testing ballistic missiles.

Two weeks ago, North Korea shot a ballistic missile that disappeared from Russia at sea. The UN Security Council condemned that test Monday.