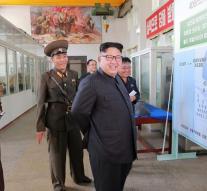 pyongyang - North Korea fired a rocket on Friday morning (local time). The unidentified projectile was fired near the capital Pyongyang and flew in the direction of Japan.

According to the Japanese transmitter NHK, the rocket flew across the north of the country and then landed it in the Great Ocean.

South Korea and the United States are still investigating what kind of rocket it is.