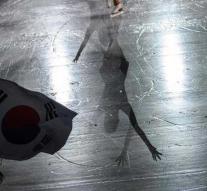 seoel - North Korea has canceled a cultural event that would hold up in the north with South Korea this coming Sunday. The South Korean authorities have announced this on Monday, according to news agency Yonhap.

North Korea would be angry at biased reports in the media about the country's participation in the Winter Olympics. The canceled event was scheduled on February 4 on Mount Kumgang, which is less than 20 kilometers from the South Korean border.