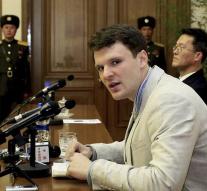 washington - North Korea has released US student Otto Warmbier. That's what the US Secretary of State Rex Tillerson said on Tuesday.

According to Tillerson, Warmbier is on his way to the United States, where he will be reunited with his family. The news about the release of Warmbier coincides with the visit of former NBA star Dennis Rodman to North Korea.