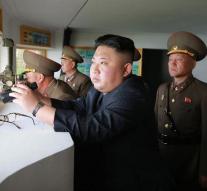 seoul - North Korea says once again an American has arrested suspicion of 'state-hostile acts.' The authorities arrested Kim Hak-song on Saturday, reported government agency KCNA. He would have worked for the University of Science and Technology in Pyongyang (PUST).

The North Korean authorities recently claimed the arrest of another US citizen. That same man, Kim Sang-dock, would have performed work for the University in Pyongyang, which opened the doors in 2010. He was arrested at the airport of the North Korean capital at the end of April.

Currently known, four Americans are stuck in the Stalinist country. In addition to Kim Hak-song and Kim Sang-dock, it is about 22-year-old Otto Warmbier and Kim Dong-chul, a 62-year-old missionary.