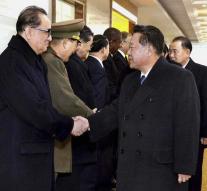 pyongyang - North Korea has declared a mourning period of three days following the death of Cuban leader Fidel Castro. The flags on public buildings go half-mast, as have the Central Committee of the Party, the Presidium of the parliament and the Cabinet decided.

The Pyongyang regime, moreover sends one major delegation to the farewell ceremony in Cuba, as state media informed Monday. Although deceased, the deeds of Castro remain before the revolution and the fraternal relations between the two countries continued existence in the memory, according to a North Korean message of sympathy to Fidel's brother Raúl.

Cuba is one of the few countries to maintain good relations with North Korea for decades. From 1960 there are diplomatic relations in 1986 Fidel Castro visited Pyongyang. Castro died Friday at the age of ninety.