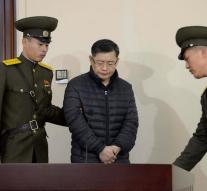 peking - North Korea has released a Canadian pastor born in South Korea previously convicted of life-long forced labor. His release was on humanitarian grounds, according to KCNA State Press Office.

Hyeon Soo Lim, who was convicted in 2015, was released due to sickness on bail, called it. The man works for one of the largest churches in Canada. He got the punishment because he, according to the authorities, tried to overthrow the regime in North Korea.

Earlier this year, North Korea also suffered a sick prisoner. The student Otto Warmbier (22) died shortly after returning to the US. According to his family, he succumbed to brain injury during his imprisonment. Pyongyang said, however, that Warmbier suffered from botulism and that it had released the student for humanitarian reasons.