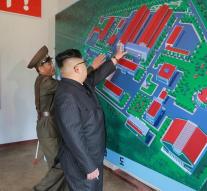 vienna - North Korea has increased its attempts to make parts for a new nuclear reactor.

That states the International Atomic Energy Agency (IAEA) in a report published Friday. In addition, according to the UN organization, the country also maintains its main nuclear reactor, which supplies the fuel needed for the North Korean nuclear weapon program.

The IAEA has no access to the isolated country and should therefore primarily rely on satellite imagery. The agency saw indications that reactor parts were being used on the construction site of the new light water reactor.

However, major new parts would not have come true. The new North Korean reactor must be larger than the existing Yongbyon reactor.